Innovations in Field of Spinal Technology

Spinal specialists and spinal surgeons work in a field that sees continual advancements and innovations. As research progresses and technology improves, the techniques used by spinal specialists become less invasive and can be performed with increased precision. In this article, we will discuss some of the latest developments in the field of spinal technology that will be of interest to those looking for spine doctor New York.

The FDA has cleared the robotic system designed by Mazor Robotics, and it is the only one of its kind. Developed in order to provide assistance with robotic guidance, it has already become popular among other medical disciplines. The functionality of this invention allows for surgeons to develop the plans for their operation in a three-dimensional setting, thus plotting out the course for the surgery. A study was done in 2014 that showed that robotics could shorten the length of surgeries and that they also lessened the amount of radiation that a patient was exposed to by as much as 74%. 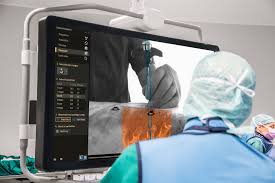 The field of genetic testing is one that has allowed people to gain access to information was been previously unavailable. Diagnosing disease is happening earlier, and treatment can begin sooner and with a better expected outcome. These processes are also progressing in the field of spinal specialty and surgery. This sort of testing helps to keep costs down, and it can be done by collecting a swab of saliva. ScoliScore has developed a screening tool called the AIS prognostic test that is able to tell with 99% accuracy whether patients’ adolescent idiopathic scoliosis will progress into severe scoliosis.

When saliva is obtained, it is tested to locate the presence of DNA markers for the genes that either prevent or protect the spine from developing abnormalities in its curvature. The data is then projected unto a numbered scale to determine the level of likelihood that the patient will experience severe scoliosis, and this has changed the way doctors proceed with treatment. Instead of requiring a series of visits over a period time to measure the progression of the deformity, doctors are able to treat the condition early on according to its predicted path.

The FDA has approved a device that provides stimulation to the spinal cord, and it can work alongside an MRI. The apparatus is called SureScan, and it was developed by MedTronics. Its first uses were to help patients experiencing pain in their legs and back on a reoccurring basis. Built into the technology is a system for keeping all RF energy contained within the unit, and the device was tested for patient safety on more than 10,000 patients and on 100 million simulations. People interested in spine doctor New York can find out more about this innovation here.